Happy Sunday everyone! Hope you’re having a fab weekend despite the weather ! Today I’m welcoming the blog tour for Abi Silver’s fifth Burton and Lamb book, The Midas Game.

Massive thanks to the author and Amber Choudhary of Midas PR for inviting me on the blog tour and to Lightning Books for my copy of Thd Midas Game. I had previously ordered the e-book edition back in June when it was published.

WAS VIRTUAL KILLING JUST THE BEGINNING?

When eminent psychiatrist Dr Liz Sullivan is found dead in her bed, suspicion falls on local gamer and YouTube celebrity Jaden ‘JD’ Dodds. Did he target her because of her anti-gaming views and the work she undertook to expose the dangers of playing online games? And what was her connection with Valiant, an independent game manufacturer about to hit the big time, and its volatile boss?

Judith Burton and Constance Lamb team up once more to defend JD when no one else is on his side. But just because he makes a living killing people on screen doesn’t mean he’d do it in real life. Or does it?

Another thought-provoking courtroom drama from the acclaimed author of the Burton & Lamb series. 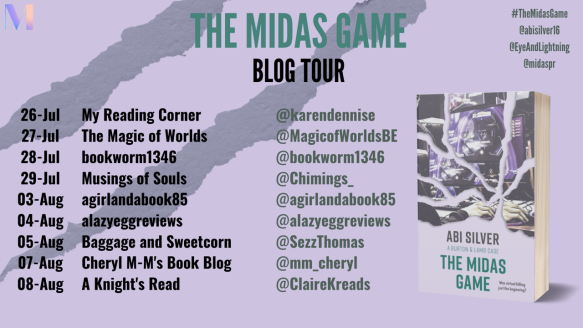 Over the past few years, there has been a lot of discussion about the influence of gaming on gamers in their real life. The fingers that have been pointed at games like Call Of Duty and Fortnite when a young adult commits a crime that ends in someone’s death.

Abi Silver’s The Midas Game explores this topic of discussion as Constance Lamb and Judith Burton face the trial of a prolific gaming YouTuber accused of murdering his neighbour, a psychiatrist specialising in addiction. Could JD really have caused the heart attack that killed Liz Sullivan? A young man with his life ahead of him and a seriously successful following any wannabe YouTuber would love – would he really throw all that away?

Enter Lamb and Burton, the legal duo who I’ve grown to love over the past four books. Their dynamic is perfect as a court room crime fighting team. Lamb with her tenacity and clue seeking nose, following every lead possible to prove her client’s innocence whilst Burton performs in court like it’s a theatre, equally keen to win the case for her defendant. I was totally engrossed in the trial. I love the way Burton teases information out of the individual in the witness box, asks what appear to be irrelevant questions irking the prosecution and yet still manages to get her point across.

Yet again Silver has crafted an intriguing and thought provoking read, taking a topical technologically related subject and created a very realistic legal thriller around it. Is the gaming industry addictive enough to lead someone to murder? Reading The Midas Game gave me an insight into potentially how cutthroat the gaming industry is from the development side of the fence and how much constant gaming can affect someone’s well being. This is another consuming read from Silver, great addition to the series.

Who Is Abi Silver?

Abi Silver was born in Leeds and is a lawyer by profession. Her first courtroom drama featuring the legal duo Judith Burton and Constance Lamb, The Pinocchio Brief, was published by Lightning Books in 2017 and was shortlisted for the Waverton Good Read Award. Since then she has published four more in the acclaimed series – The Aladdin Trial, The Cinderella Plan, The Rapunzel Act and The Midas Game – and counting.

She lives in Hertfordshire with her husband and three sons.

Read more about Abi and her work at www.abisilver.co.uk.