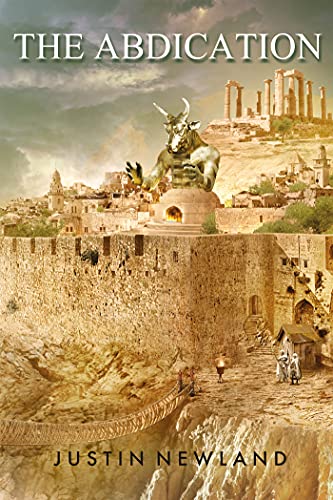 Happy Tuesday everyone! Today I’m helping kick off the blog tour for Justin Newland’s book, The Abdication and Justin has kindly agreed to answer some questions.

Big thanks to Zoe O’Farrell of Zooloo’s Book Tours for inviting me on the blog tour and to Justin for taking the time to answer my questions.

The town of Unity sits perched on the edge of a yawning ravine where, long ago, a charisma of angels provided spiritual succour to a fledgeling human race. Then mankind was granted the gift of free will and had to find its own way, albeit with the guidance of the angels. The people’s first conscious act was to make an exodus from Unity. They built a rope bridge across the ravine and founded the town of Topeth. For a time, the union between the people of Topeth and the angels of Unity was one of mutual benefit. After that early spring advance, there had been a torrid decline in which mankind’s development resembled a crumpled, fading autumnal leaf.

Following the promptings of an inner voice, Tula, a young woman from the city, trudges into Topeth. Her quest is to abide with the angels and thereby discover the right and proper exercise of free will. To do that, she has to cross the bridge – and overcome her vertigo. Topeth is in upheaval; the townsfolk blame the death of a child on dust from the nearby copper mines. The priests have convinced them that a horde of devils have thrown the angels out of Unity and now occupy the bridge, possessing anyone who trespasses on it. Then there’s the heinous Temple of Moloch!

The Abdication is the story of Tula’s endeavour to step upon the path of a destiny far greater than she could ever have imagined.

In 10 words or less, describe your book?

A young woman confronts her faith in a higher purpose.

Where did the inspiration for your book come from?

My books take a different look at known events or periods of history, and examine the hidden assumptions we make about our history.

In The Abdication, I wanted to take a fresh look at a forgotten gem in each of our lives – free will. Free will is essential to our identity as human beings yet as a theme, it seems to me that hardly anything has been written about it – in fiction anyway.

I was inspired to explore such questions as: what is the purpose of free will? It’s a gift from the gods, but have we treated it with the reverence it deserves? Or, as the title of the novel suggests, have we abdicated from its right and proper use?

These were the inspirations for the theme of the novel.

Then I needed to find a setting for it. This novel, unlike my others, is not set rigidly in a historical place not does it feature any real historical personages.

The novel’s setting – a gorge separating two mountain top towns – was in part inspired by Masada, a fortress in the Judean desert. The siege of Masada epitomised the fierce resistance of the Jews against the Romans in 79 A.D. The Roman army spent two years building a ramp to arrive at the top of the hill top town, only to find all its Jewish warriors had committed suicide to avoid capture.

Talk us through a typical day for you?

There isn’t really a typical day, because it’s a mix.

For example, I may work on marketing and promoting my books. I’m currently doing a lot of book signings on Saturdays at WH Smith stores in and around the South West.  I’ll be arranging those, and following up on media interest in the books.

I’ll also either write or do some research on my Work In Progress. And, if I have time, I enjoy chatting to friends about current affairs.

After an evening meal, I’ll sit with my partner and watch TV, often crime drama of one kind or another.

What sort of books do you read and what are you reading at the moment?

I’m an eclectic reader, but these days I tend to read around the novel I’m writing, my Work In Progress.

Master and Commander by Patrick O’Brian.

Both are research material for my work in progress.

Can you share anything about your work in progress?

I’m working on a novel set in Elizabethan England. It’s a supernatural re-telling of the story of the Spanish Armada (1588).

At the time, Spain was the richest and most powerful European nation by far with huge resources, a massive Empire and a colossal fleet of ships. So, how could its navy, the Armada, be repulsed by a bunch of pirates and buccaneers?

Who reads your first draft?

I do. My first draft is not even remotely near good enough, or complete enough to ask someone else to read it. I read the first draft to work out if I have successfully completed the main character arcs, and often enough I haven’t. Then I also read it to discover any themes hidden between the lines, and then I have to decide if I want to elaborate on those additional themes. I would not really expect to.

Just for fun: what would your Mastermind subject be?

Ancient Egypt as the ‘Mother and Father of All Things’.

Who Is Justin Newland? 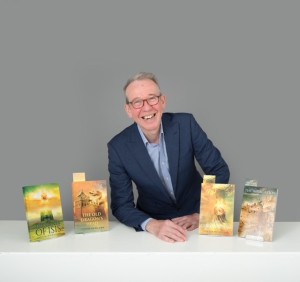 Justin Newland is an author of historical fantasy and secret history thrillers – that’s history with a supernatural twist. His stories feature known events and real people from history which are re-told and examined through the lens of the supernatural. He gives author talks and is a regular contributor to BBC Radio Bristol’s Thought for the Day. He lives with his partner in plain sight of the Mendip Hills in Somerset, England.

The Genes of Isis is a tale of love, destruction and ephemeral power set under the skies of Ancient Egypt. A re-telling of the Biblical story of the flood, it reveals the mystery of the genes of Isis – or genesis – of mankind.

The Old Dragon’s Head is a historical fantasy and supernatural thriller set during the Ming Dynasty and played out in the shadows the Great Wall of China. It explores the secret history of the influences that shaped the beginnings of modern times.

Set during the Great Enlightenment, The Coronation reveals the secret history of the Industrial Revolution.

His latest, The Abdication (July, 2021), is a suspense thriller, a journey of destiny, wisdom and self-discovery.