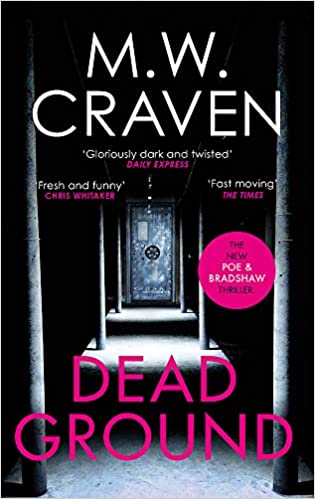 🍻🍻🍻HAPPY PUBLICATION DAY TO MIKE CRAVEN 🍻🍻🍻 Dead Ground, the fourth in the Washington Poe series is out today!!!

Massive thanks to Constable and Little, Brown UK for my advanced e-copy of Dead Ground. I also preordered a special edition with priddy pink sprayed edges from Waterstones that arrived yesterday!

Detective Sergeant Washington Poe is in court, fighting eviction from his beloved and isolated croft, when he is summoned to a backstreet brothel in Carlisle where a man has been beaten to death with a baseball bat. Poe is confused – he hunts serial killers and this appears to be a straightforward murder-by-pimp – but his attendance was requested personally, by the kind of people who prefer to remain in the shadows.

As Poe and the socially awkward programmer Tilly Bradshaw delve deeper into the case, they are faced with seemingly unanswerable questions: despite being heavily vetted for a high-profile job, why does nothing in the victim’s background check out? Why was a small ornament left at the murder scene – and why did someone on the investigation team steal it? And what is the connection to a flawlessly executed bank heist three years earlier, a heist where nothing was taken . . .

Bloody hell!!! What have I just finished? I feel out of breath after reading Dead Ground. Deep breath!!!

So after the incidents of The Curator, Poe’s boss Flynn is on mat leave so Poe and Tilly are kind of let loose to save Poe’s abode from the evil council. Until they’re frogmarched out of court to Manchester. But what awaits them, is a different kettle of fish and Poe has some new “friends” to play nicely with… or rather try and tolerate in his own unique way.

I loved Tilly’s performance in the courtroom, she really is something else. Perfect retorts said so innocently to the council’s solicitor. As this series has gone on, she’s learnt so much from Poe and she becomes more endearing as the books go on!

As for Poe’s new friends, they learn quickly that no one messes with Poe, even the Secret Service! This man is brilliant, his methods may not be the most orthodox at times but he sees things others don’t. And in this particular murder case, he needs to. There are secrets everywhere! Who can he trust!!

I’ve got to admit I did chuckle at the mention of Fluke despite the author’s adamant no to further outings for his other detective. Go on…. you know you want to…. please Mr Craven 🙏🙏🙏

Craven has crafted yet another seriously fast paced, addictive read. I raced through it, internally annoyed when real life came knocking. Why would I want to put my kids to bed when Poe is solving a case???! The amount of smoke and mirrors Craven built up around the various characters and different agencies with hidden agendas made Dead Ground ooze with intrigue and that hook to keep me reading. An absolute stonking crime thriller from the Craven keyboard!!!

M. W. Craven was born in Carlisle but grew up in Newcastle, returning after 31 years to take up a probation officer position in Whitehaven, eventually working his way up to chief officer grade. Sixteen years later he took the plunge, accepted redundancy and became a full-time author. He now has entirely different motivations for trying to get inside the minds of criminals.

His first novel featuring Washington Poe and Tilly Bradshaw, The Puppet Show, was published by Constable to huge acclaim, and it has since won the CWA Gold Dagger Award and been shortlisted for the Amazon Publishing Readers’ Awards: Best Crime Novel, the Goldsboro Glass Bell Award and the Dead Good Reader Awards.

M. W. Craven lives in Carlisle with his wife, Joanne. When he isn’t out with his springer spaniel, or talking nonsense in the pub, he can usually be found at punk gigs and writing festivals up and down the country.