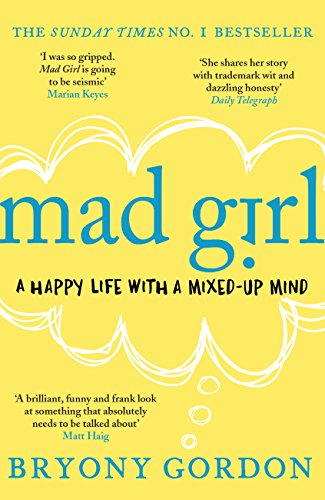 Happy Thursday everyone! Can you smell it? The weekend is almost here!

Today, I’m continuing my quest with another non-fiction book, this time from columnist and mental health advocate Bryony Gordon.

It’s the snake in her brain that has told her ever since she was a teenager that her world is about to come crashing down: that her family might die if she doesn’t repeat a phrase 5 times, or that she might have murdered someone and forgotten about it. It’s caused alopecia, bulimia, and drug dependency. And Bryony is sick of it. Keeping silent about her illness has given it a cachet it simply does not deserve, so here she shares her story with trademark wit and dazzling honesty.

A hugely successful columnist for the Telegraph, a bestselling author, and a happily married mother of an adorable daughter, Bryony has managed to laugh and live well while simultaneously grappling with her illness. Now it’s time for her to speak out. Writing with her characteristic warmth and dark humour, Bryony explores her relationship with her OCD and depression as only she can.

“when you are well, you cannot even begin to imagine the places that you went to in your head…”

If nothing else, this sentence from Bryony Gordon’s Mad Girl is worth more than a thought. It really resonated with me. There are days that I can’t believe where my thought process had led me and the irrationality that I have indulged over the past few years. But the whole journey Gordon shares is something really worth spending time reading.

For me (naively), my understanding of OCD was the washing of hands, the multiple checks of the door being locked. But it is so much more. The brain is in overdrive in its thought processing. Gordon’s account of her need to control because of the OCD is very raw and shocking but incredibly brave. Her personification of her OCD is brilliant “evil, but ever so slightly enticing…” just perfect in choice – when you read it, you’ll understand why!

The story of Paul made me well up. No person who professes to love you should make you feel like shit and Paul was that person. Gordon’s recollection of this relationship is heart breaking but it’s something that happens oh so often and shouldn’t. People shouldn’t have their self esteem shattered by someone they love. And yes, Paul is not his real name.

the only person who has ever been able to deliver me a break is, um, me.

As Gordon shared how she talked about her problems with her boss in tears, I was there. These are not easy conversations. Showing vulnerability to a manager even one who’s a friend and is understanding takes a lot and Gordon really portrays this.

Gordon’s journey is a long one and it’s not over but she knows she has a support network when she has a wobble (or worse). She has her coping mechanisms which is something to aspire to.

I have to say, I’ve made this book sound very heavy but it’s not. Bryony Gordon is a brilliant storyteller. She gives even her darkest moments an air of lightness but not to the extent of frivolity. No, her writing is jovial but with a deep sense of realism. I have The Wrong Knickers sat in my bookshelf which, as she points out in Mad Girl, is a very different read. But I will still indulge as I love her writing style and I will be acquiring her other books to read.

Mad Girl is a stark reality of someone with problems, problems that they can’t control and possibly don’t fully understand. It gave me comfort that what I’ve experienced mentally over the past few years in coming to terms with my physical health, the effects of lockdown and dealing problems with work isn’t abnormal. My only regret is I didn’t read this sooner. Mad Girl is not a manual or a cure for mental health problems at all. It’s a kind of comforting hot chocolate to reassure you that what you’re experiencing or have experienced is normal and shouldn’t be anything to be ashamed of.

Who Is Bryony Gordon?

In the 18 years that she has worked for the Telegraph, Bryony Gordon has become one of the paper’s best-loved writers. She is the author of the bestselling The Wrong Knickers plus The Sunday Times Number One bestseller Mad Girl which was nominated for a British Book Award. Her weekly column in the Sunday Telegraph has won her an army of fans who have followed her journey from single girl about town to – finally! – settled mum. Bryony is now 37 and lives in Nappy Valley (Clapham) with her daughter Edie and her husband, a financial journalist. The last sentence is one she never thought she would see written down on paper.