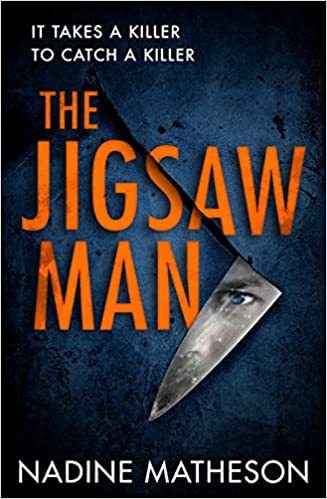 🎉🎉🎉 HAPPY PUBLICATION DAY TO NADINE MATHESON 🎉🎉🎉 The Jigsaw Man is out today!!!

Massive thanks to HQ for my advanced copy of The Jigsaw Man.

There’s a serial killer on the loose.

When bodies start washing up along the banks of the River Thames, DI Henley fears it is the work of Peter Olivier, the notorious Jigsaw Killer. But it can’t be him; Olivier is already behind bars, and Henley was the one who put him there.

The race is on before more bodies are found.

She’d hoped she’d never have to see his face again, but Henley knows Olivier might be the best chance they have at stopping the copycat killer. But when Olivier learns of the new murders, helping Henley is the last thing on his mind . . .

Will it take a killer to catch the killer?

Now all bets are off, and the race is on to catch the killer before the body count rises. But who will get there first – Henley, or the Jigsaw Killer?

Just imagine, you’re out for a walk by the river (the UK has been walking a lot over the past 12 months right?) and you find an arm just there? Just imagine! So many questions, whose arm is it? Where’s the rest of the body? Who would do this??! Well that’s the kick off of The Jigsaw Killer and it’s that that pulls you in for the long haul.

The characters Matheson has created is a varied bunch but this literary cast each has a part to play and oh boy do they play it superbly. Anjelica Henley is an interesting woman. She obviously a good copper but her previous experience with the seriously creepy Peter Olivier has cast a shadow. She’s a determined woman and she wants the killer behind bars no matter what!

Yes, Olivier have me the creeps but he’s harmless enough right in a secure prison…. so who is copying him almost to the T? But it quickly became not just about the who but the why!!

I really hope that this is the start of something. Matheson has created a sinister realm with creepy villains. Yes it’s another brilliant debut for 2021. 2021 is slowly turning into the year of the debut for me and Matheson’s offering is a cracking addition to this year’s debut listing.

Who Is Nadine Matheson?

Nadine Matheson was born and lives in London. She began her working life at the BBC and now practices as a criminal defence lawyer. In 2016, she won the City University Crime Writing Competition and completed the Creative Writing (Crime/Thriller Novels) MA at City University of London with Distinction in 2018.

Her crime fiction novel, The Jigsaw Man, will be published by HQ on 18 February 2021 and Hanover Square Press on 16 March 2021.