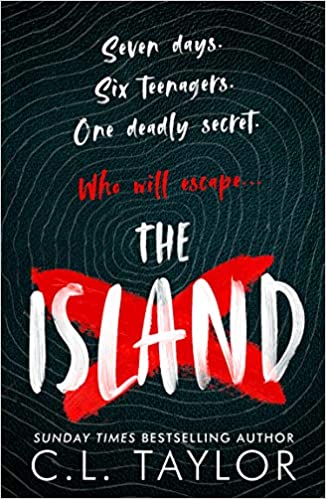 It’s the weekend!!! It’s miserable outside with us all feeling the effects of Storm Christoph. So why not treat yourself to a trip to a remote Thai island. Can’t you feel the sun on your shoulders already?

Many thanks to HQ for my advanced e-copy of The Island that I received through Netgalley. I also bought myself a copy.

Welcome to The Island.

Where your worst fears are about to come true…

It was supposed to be the perfect holiday: a week-long trip for six teenage friends on a remote tropical island.

But when their guide dies of a stroke leaving them stranded, the trip of a lifetime turns into a nightmare.

Because someone on the island knows each of the group’s worst fears. And one by one, they’re becoming a reality.

Who will make it off the island alive?

I’ve loved all of C L Taylor’s books I’ve read and really enjoyed The Treatment her first step into the world of YA writing. So I couldn’t wait to read The Island. The whole blurb reads like any of her adult novels, the suspense, that hook to pull you in to her psychological thrillers.

I won’t say too much about the whole story line as the blurb says enough and I fear I’ll say something that will spoil the rather tense build to the book’s climax. But what I will say is it was rather brilliant. I was there shadowing this party of 6 as they got used to their surroundings without their local survival guide. At this point, I had flashbacks to reading William Golding’s Lord Of The Flies – would this group of teens turn savage in order to survive or was there something more twisted to their stay?

I loved how the narrator switched between Jessie and Danny. Their different voices guided me through this ordeal in a Thai paradise. I was intrigued why those two in particular were telling me the story but irrespective of the reason, I was hooked with their tale.

This not-so-young adult thoroughly enjoyed this tense escape to a remote Thai island. I was hooked on the story but had to break for a 5 minute breather at the end of a number of chapters to catch my breath and steady my unnerved self. Taylor has yet again created a taut thriller for both young adults and her adult fans.

C.L. Taylor is an award winning Sunday Times bestselling author of seven gripping psychological thrillers including Sleep, a Richard and Judy Book Club pick for autumn 2019. Her books are not a series and can be read in any order:

She has also written two Young Adult thrillers, The Treatment, which was published by HarperCollins HQ and The Island, which will be published in January 2021.

C.L. Taylor’s books have sold in excess of a million copies, been number one on Amazon Kindle, Audible, Kobo, iBooks and Google Play and have been translated into over 25 languages and optioned for TV.

Sleep won the ‘best ebook’ award in the Amazon Publishing Readers’ Awards. The Escape won the Dead Good Books ‘Hidden Depths‘ award for the Most Unreliable Narrator. The Fear was shortlisted in the Hearst Big Book Awards in the ‘Pageturner‘ category.

Cally Taylor was born in Worcester and spent her early years living in various army camps in the UK and Germany. She studied Psychology at the University of Northumbria and went on forge a career in instructional design and e-Learning before leaving to write full time in 2014. She lives in Bristol in the UK with her partner and son.

Sign up to join the CL Taylor Book Club for access to news, updates and information that isn’t available on the web, as well as exclusive newsletter-only competitions and giveaways and the books that CL Taylor thinks will be the next big thing. You will also receive The Lodger for free when you join: cltaylorauthor.com/newsletter