Wooo hooo!! I’m kicking the week off in style by sharing my review of Ruth Harrow’s In My Wake on the penultimate day of the blog tour.

Many thanks to the fabulous Sarah Hardy of Book On The Bright Side Publicity for inviting me on the blog tour and for my e-copy of In My Wake.

Decades ago, the disturbing disappearance of an eleven-year-old girl shook the tiny village Hannah grew up in. Now Hannah receives the shock of her life when she is told her sister, April, has committed suicide. Distraught, she returns to her childhood home for the funeral.

But someone who refuses to forget the past has sickening shocks in store for the grieving family and soon latch onto Hannah instead, leaving her looking over her shoulder at every turn.

Now the nightmares aren’t only inside Hannah’s head …

Hannah feels her grip on reality slipping as she starts to suspect even those closest to her – including her husband Will. April had uttered words of warning against him, but was it merely jealousy? Or does Hannah truly have something to fear from the father of her child?

Could the danger be closer to home than she realises?

And why is Hannah’s own father insisting that the past should remain in the past?

In My Wake is an unputdownable psychological thriller about a woman forced to confront her devastating past. Fans of K.L. Slater, Shalini Boland, Laura Marshall and The Silent Patient will love the shocking twists and unexpected revelations.

Why have I not heard of Ruth Harrow before?? Why why why??? Psychological thrillers are my chosen genre and yet I don’t understand why I’ve never read any of Harrow’s books before…. yes that’s right I really enjoyed this tense thriller!

As Hannah returns to her childhood home for her sister’s funeral, she starts to get unnerving messages from someone professing to be her sister. But she’s dead isn’t she? Well, presumed; no body was actually found… a little bit like poor Paige Wakefield. Are both these women alive and taunting Hannah in her grief?

But Little Bishopford is a nosey village. Everyone knows what’s happening the instant it happens and the village grapevine is faster than the bullet train. Can Hannah find out who her tormentor is before the secrets of the past hit the grapevine and everyone knows what happened so many years ago?!

Like I said, I really enjoyed In My Wake. The bubbling thread about Paige Wakefield added to Hannah’s unnerved feelings towards those in Little Bishopsford, those she’d know most of her life. I didn’t know who was telling the truth, even Hannah’s recollections of her adolescence could be questioned. A cracking psych-thriller if ever I read one.

Who Is Ruth Harrow? 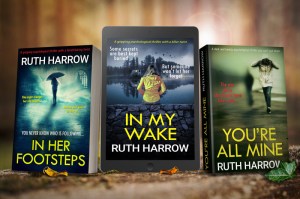 Ruth Harrow was born and raised in London and graduated from the University of Kent before embarking on an unfulfilling career as an accountant.

She lives in Colchester with her husband, two children and chocolate Labrador, Rolo.
For more information and to get exclusive updates about future books please visit: RuthHarrow.com

Sign up here to get updates for news and releases: https://ruthharrow.com/notification-list/