Many thanks to Rachel Gilbey for inviting me on the blog tour and for my e-copy of An Implacable Woman.

When a man hits his wife, then it’s his turn to die

Furious that the courts and police can’t prevent respected surgeon John Kirby from beating his wife, Sally Mellors steps in to save her. Permanently…

But Grace Kirby isn’t the only one who needs saving and Sally quickly discovers she’s taken on a much bigger job than she’d thought.

With her unique ability to blend justice with fun, Sally sets joyfully about the business of removing the monsters from women’s lives, but is she in danger of becoming a monster herself?

As her friends in the police get ever closer, Sally has some serious questions of her own to answer. 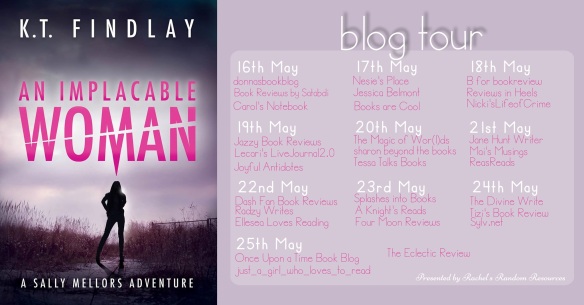 I’ll admit, I didn’t know what implacable meant before I read this book. I looked it up. It’s got two meanings “unable to be appeased or placated” and “unable to be stopped; relentless”. Now this second version definitely describes Sally Mellors on her mission to rescue battered wives from their abusive husbands.

I loved the camaraderie Sally had with her friends, the golf rounds, unexpectedly dropping round for dinner, the impulsive days out. The fact that Sally has such a dark criminal alter ego in Selina and some of her best friends work within the law enforcement field did amuse me slightly. Sally’s rather excellent acting skills came into play on numerous occasions as her friend Perry discussed the last activities of the vigilante Selina.

Having not read A Thoughtful Woman did leave me at a slight disadvantage, mainly because I didn’t know the full story of Selina’s incarnation. Findlay hinted at certain aspects however I personally didn’t get the complete picture. This didn’t detract from my enjoyment of the escapades of Sally/Selina, her mission was extremely well meaning.

An Implacable Woman is a dark crime thriller with a slight lightness to it. It had a great pace to the story as I raced (on a Kawasaki) alongside Sally as she rids her community of some god damn awful men.

Who Is K T Findlay?

K.T. Findlay lives on a small farm where he dovetails his writing with fighting the blackberry and convincing the quadbike that killing its rider isn’t a vital part of its job description.