Happy Tuesday everyone! I’m delighted to be hosting the bog tour for Louise Burfitt-Dons’ The Missing Activist.

Big thanks to the fabulous Sarah Hardy of Book On The Bright Side Publicity for inviting me on the blog tour.

Post-Referendum Britain and a country on high alert for terrorist attacks. When a young political activist disappears in London, an off-the-wall PI Karen Andersen is put on the case. She uncovers secrets of a party system which prizes loyalty above truth, a serial killer and a female Jihadi plotting deadly revenge on the British Government.

“A behind-the-scenes twisty political thriller and bullying story of poignancy and compassion. The author has had experience of both having been a national candidate during the 2015 General Election as well as the founder of an anti-bullying charity during the scandal which rocked the Tories after the tragic death of a young activist later that year.” LBC

If you were a fan of Lisbeth Salander, you will love her British counterpart Karen Andersen. 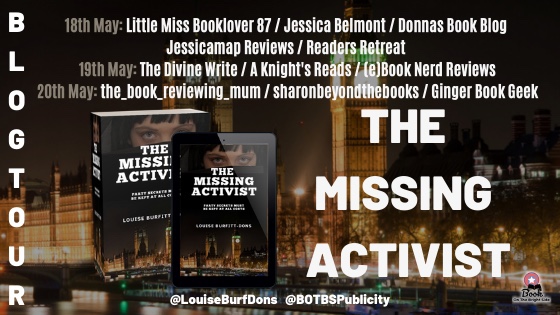 Zinah al-Rashid recruited more brides for Isis than anyone else. Alhamdulillah. Praise be to God.

Her fifth teenager crossed to Syria without any hitches. The accolades this brought meant she was now after her sixth. She dressed in her abaya and got ready for the interview with the schoolgirl who’d been messaging her nonstop to meet.

Already a jihadi website hailed Zinah a superstar and the write-up, short as it was, got rated with yellow smiley faces. The Brotherhood applauded the brave sister for her skill at teaching the ways of Allah. They commended her ability to work undercover so not a soul could pick her true western identity.

So this was fame. How great it felt! Zinah hoped her biological father learned it was his very own daughter being praised for heroic missions. It was payback for the twenty-five years since he’d adopted the Islamic religion, changed his name to Mohammed and headed east.

At that moment Zinah regretted her mother and stepfather weren’t still alive to see how well she and Mohammed worked together for Isis. They’d have a fit.

It was nearly time to leave the room for her meeting. Tying the laces on a pair of green suede trainers she reflected on how the two people who had brought her up mocked Mohammed’s open-toed sandals and bushy beard. Infidels.

Still high on the Islamic honours, Zinah resisted checking the net once more to see if she’d got more glowing comments from her fans. Instead, she left her hotel room early and headed for the coffee shop.

Because the girl she had a date with was late, Zinah had time to kill. To begin with, at the rear of Costa, she updated her note-taking app. Stay organised. It was vital to keep her jihadi profile hidden from those who worked with her in her other world. Her public relations on behalf of Isis depended on it. Was she the only one calling out Western media’s lies? It sure seemed like it.

How the press spun things! Wasn’t it in the UK where kids cut themselves with designer knives and got high on drugs? They were the ones in need of saving. Not Muslim women.

The teenager fitting the description she’d sent Zinah entered the coffee bar. She slouched in, head in an iPhone. Who was she speaking to when she should be focused on this important meeting? Maybe her mother? The silly woman was dead set on her becoming an electrical engineer, not studying the words of the Prophet? Didn’t she think her daughter could do both? But the mum could be a danger to the operation, all the same. So Zinah knew the tack to take and used it. She welcomed the teen with smiling eyes.

Zinah had read it right. The girl flushed pink. She was more excited by her new persona than Islam.

Amirah was now in with the ‘in crowd’.

‘A person’s name says something special about them and their character,’ Zinah enthused. ’It’s how people interact with you.’

‘And when I call myself Amirah they see straight away I’m a Muslim.’

While Zinah could call up a show of empathy in an instant, it took time to develop real influence over these girls. You can’t hurry things. So when Amirah fiddled endlessly with her hijab, Zinah stopped herself saying, ‘Leave it alone.’

Amirah was the same as the others she’d converted in this respect. Her first rush of passion for the Caliphate was more to do with the ‘look at me’ factor than anything else.

‘It’s a beautiful name, isn’t it?’ With the spark ignited, fifteen minutes later it burst into flame. Zinah had not lost her touch, had she? She had a way with these girls. Amirah now ached to become more devout. Another win.

‘When can I wear the full-face veil like you do?’ Amirah was longing to copy her, she could tell. Cover up completely. The parents were the blocking force because they’d not allowed Amirah to buy an abaya. But even though Zinah hated them for it, because they represented the major obstacle to her ambitions, she didn’t show it.

‘Your parents are right.’

She understood protective mothers and fathers. She’d dealt with dozens before. Find the point of agreement! To begin with, Zinah tackled the clothing issue which was usually the first to concern them. Yes, the hijab was indeed different to the niqab or the burka. To move from the scarf to the veil in two weeks would likely provoke people in the supermarket and on the street. The best way to wear what Amirah wanted, which was full Islamic dress, was to leave the UK. To up sticks from the place of her birth and travel east to join her sisters in Syria.

When she did that, she’d be an instant celebrity, coming from the West. Just like the girls in the top show business magazines. But better. Much better. They didn’t have immoral size zero requirements where Amirah was going. ‘Out there women are beautiful in their natural form.’

Not only did Amirah love the flattery, but also the travel sounded fun. It was ‘like’ the most cool idea she’d ever had.

‘You will live in a maqar at first.’ A shared house for women.

Then, unlike her parents, Zinah addressed Amirah as an adult. ’You don’t have to worry about meeting someone perfect for you because Isis do it all. You don’t have to go clubbing and be disrespected.’

With this final detail one more recruit was well on their way to a new life with Isis. Straightaway the sixteen-year old wanted to leave boring school and become a married woman. Like tomorrow.

‘Can you believe where my mum is right now?’

The girl had been bloody jabbing at WhatsApp, so no surprise she wanted to spill.

Mum Linda Clark was at an anti-sharia conference and been sending updates. It couldn’t be worse.

They googled it and that’s when Zinah learned it was not only being held in the town but at the very hotel she was staying in. How had she missed that? She seethed at her slip up. Then vowed it would never happen again. She’d travelled halfway across the damn country for this conversation.

But Amirah saw the twist of fate as an opportunity. ‘Oh cool. If you go back there she’ll see you.’

Another message arrived with a chime. Amirah read it out. ‘Islam counts women as half of men.’

Messages were firing through. What Alesha Parkhurst was saying. How Islam treated Lindas and Amirahs as second-class citizens.

‘But sharia is a perfect system which looks after all,’ Zinah reassured the schoolgirl. ’The West makes it out as chopping off hands and stoning fornicators which it’s not. That’s only the Saudi way.’

Amirah seemed satisfied when she left.

‘We’ll be in touch,’ said Zinah departing at the same time. It was as darkness descended and, by her mental maths, exactly when the conference should be closing up. She planned her entrance to the second, picturing the glorious scene ahead.

Zinah would enter the hotel foyer just as Amirah’s mum was leaving. She would be SO gobsmacked to be faced with the epitome of all the evil she has been hearing about. Startled. She would want to ask Zinah something. Like ‘What are you doing here?’

Zinah would then ask, ‘Do you believe the rubbish you heard in there about women in the burka being subjugated?’

Zinah had learned her name from Amirah, but she wouldn’t use it because their meeting was to remain a secret. But what she would say to Linda Clark was, ‘What you’ve listened to for the last two hours from Alesha Parkhurst about Islam being an insult to women’s rights is drivel.’

It was all planned. She gathered her cloak around her. It blended with the unlit buildings as icy wet air sprayed from the alleys. The night was harsh and her mood turned bitter as she rehearsed over and over the speech she would soon deliver. But when she reached the hotel lobby all was quiet.

The seminar must have gone over time, she thought. Zinah was too early. Damn.

The only person who noted the paradox in style between the feminists and the fully cloaked Islamic woman was a bulky man loitering in the shadow of the lifts.

So Zinah al-Rashid got no audience reaction. Naturally, she felt deflated. There was little point in hanging around, so she proceeded up to the fourth floor. Only after she’d tucked herself away upstairs in the last single room with its heavy purple drapes and overhead fan did she disrobe. A full head of golden blonde hair was revealed. She slid a pair of plain glass spectacles into their case and flicked out coloured contact lenses. Her eyes changed from chestnut brown to blue.

She examined herself. The foreboding figure was no longer. Instead, reflected in the glass was a woman early thirties wearing jeans and a pleasant expression who you’d cross on the street and take no notice of at all. She promised one day all this would change.

But for now Zinah al-Rashid had to find some other means to express her resentment at those who made her mission so hard. God willing. Inshallah. 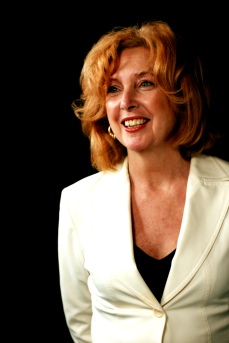 Louise Burfitt-Dons was first introduced to the idea of writing conspiracy fiction on meeting Ian Fleming when he visited her birth country of Kuwait in 1960 and befriended her father. Fast forward forty years to her founding the children’s charity Act Against Bullying in 2000. This had her advising police on the manipulation and cover up tactics of young people, girl gangs and junior cyber stalkers. She believes these are the same devices used by political parties, spies and crooks. They form the background to her thriller stories.

Her first novel (June 5 2018) The Missing Activist (New Century) was the first in a series starring off the wall P I Karen Andersen.  The plot was inspired by her experiences as a Parliamentary candidate in the UK General Election of 2015. Sequel The Killing of the Cherrywood MP was published on March 18 2020.  She is currently working on book three in the Karen Andersen series.

Louise is also a screenwriter who has worked with producers in the UK and the US.  Recent films screened on TV include Mother of All Secrets (2018), The Ex Next Door (2019, LifeTime) and Fame at a Deadly Cost (LifeTime 2020).  Not all her work has a dark tone. She loves British comedy and wrote the rom-com Christmas in the Highlands (2019) for Triventure Productions which has also made it on to the international television circuits.

She now lives in Chiswick, West London with her ex-pilot husband Donald. She has two grown up daughters and a seven-month year old granddaughter Dempsie Lee Williams.