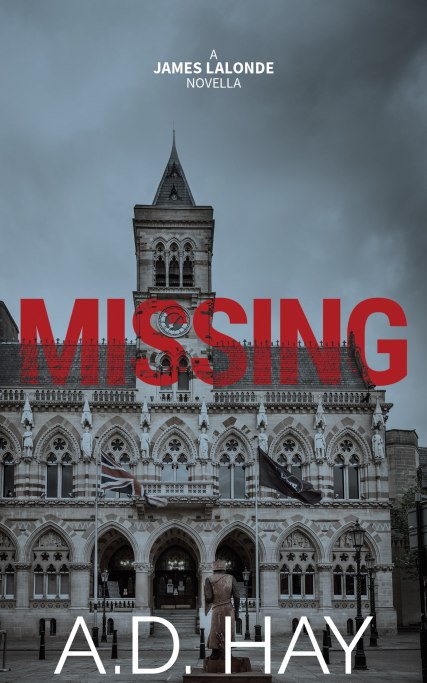 What are you missing? Well you might have missed that I’m closing the blog tour for A.D. Hay’s Missing.

Big thanks to the fabulous Sarah Hardy of Book On The Bright Side Publicity for inviting me on the blog tour and for my e-copy of Missing.

Excalibur is missing, a killer is on the loose, and his career is on the line…
James has a nose for trouble. But that’s nothing new.

This time, things are different…

…his life is on the line.

James is the chief editor of a small newspaper. It’s hardly captivating work. He’s bored. But all of that is about to change.

Late one evening, he returns home to discover his long-time girlfriend and journalist, Valentine has left. Early the next morning, James fails to reallocate her assigned story. To avoid blank space in the culture section, and loosing his job, he decides to write the story on the local museum’s latest acquisition, Excalibur.

But, there’s one thing he didn’t count on…

….Excalibur is missing, and a dead body is at the crime scene.

As his investigations commence, James unravels a tangled web of betrayal, kidnapping, and murder. But, his fact-finding hasn’t gone unrecognised. The wrong people have started to notice. And there will be consequences…dire consequences.

You’ll love this gripping cloak and dagger mystery because of the twists, turns, and ending you’ll never guess.

Missing is the first book in a reporter crime thriller series. Get it now.

I’ll hold my hands up, when I read the blurb, yes it caught my fancy but it didn’t dawn on me we were talking THE Excalibur. As in “The Sword in the Stone, King Arthur, Merlin and Guinevere” Excalibur 🤦🏻‍♀️🤦🏻‍♀️🤦🏻‍♀️🤦🏻‍♀️

It was a refreshing change to have a reporter taking the lead in the story. It’s the second in recent months where I’ve had my protagonist as a newspaper hack, taking the reins on an investigation. I rather liked James as a lead character. I’ll admit it took me a while to assimilate the name James with a Frenchman but he’s a good man. He’s a journalist who will go to lengths to get a story but he’s got a nose for the truth.

There is quite a pace to the story. Our protagonist is in the thick of the investigation following his own leads to help the one person he believes is innocent. But in my mind, as the story goes on, the waters become murky. Who is the innocent party? I really didn’t know who to trust.

Missing is a thrill to the chase to locate the Arthurian artefact worth millions but also the priceless preservation of life and love. Hay has woven a tense thriller to start what should be a cracking series!

A.D. Hay is a passionate bibliophile and can usually be found reading a book, and that book will most likely be a thriller. She is the author of Missing, the first book in a thriller series. When not absorbed in a gripping page-turner or writing, she loves to travel, drink tea, rosé, and eat pizza.