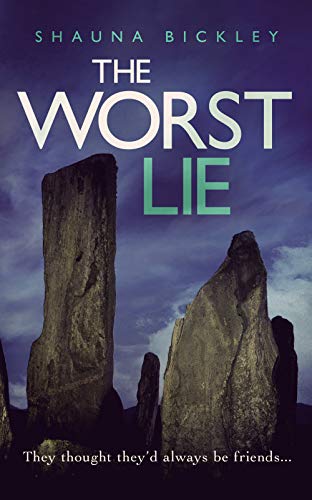 Wooo hooooo it’s the weekend!!! I’m thrilled to be welcoming the blogtour for Shauna Bickley’s The Worst Lie and I’ve got a fabulous guest post from Shauna about one key part of writing – RESEARCH!

Massive thanks to Rachel Gilbey of Rachel’s Random Resources for inviting me on the blog tour and to the author for the fab guest post!

Madelaine had everything she wanted.
Friends, a successful film career, and a loving boyfriend.

Then she was dead…

Lexie’s friend Helen was part of a close-knit group at university. Now, ten years later, Helen is fearful when another of the group reappears and suggests a reunion.

Lexie contrives an invitation to the weekend get-together at one of England’s ancient stone circles where one of the group admits they believe their long-dead friend was murdered.

Lexie discovers each of the group has secrets and each has lied, but could they also have committed murder?

There is another death at the stone circles, and Lexie uncovers information that may connect the two crimes… and implicate her good friend.

Is someone targeting the former students, or is the killer one of the group?

The Worst Lie is the second standalone novel in the exciting Lexie Wyatt murder mystery series.

If you like British crime novels featuring ordinary people in extraordinary circumstances, then you’ll love this gripping tale of secrets, lies and obsession that leads to murder.

Hello and thanks for inviting me on your blog.

I often say the reason I don’t write historical novels is that I’d never finish the research required. Certainly writing a contemporary novel means less research, but it doesn’t get you off the hook entirely.

I hope I’m never mixed up in a murder in real life because my Google search history would make me look guilty from the beginning. The local pharmacist is helpful at answering questions now he knows that I write crime novels, but I did get some strange looks initially.

I find that whatever genre of book I write, some research is usually needed. The Worst Lie is a contemporary crime novel, but some elements of it are set in 2005 and some in 2010. Once I started thinking about the changes that have occurred in technology over the past ten to fifteen years I had to do a little of that research. The group of friends in the book were at university in 2005. In my initial draft I mentioned laptops and the internet. Hmmm, what exactly was available back in the early 2000s? The other thing I had to take into account was that my novel was set in England and so things that were a little more common in the US might not have been quite so common in England at that point.

My initial draft had Lexie checking out some online newspaper reports of an incident that happened in 2005. That might not be a problem as the media has put a lot of their archives online, but the incident she was investigating was a hit and run accident in a small town. That isn’t the type of story that would generally make the national newspapers and therefore she’d be checking out reports from local papers and their archives were far less likely to be online. That meant I had to rethink Lexie’s approach and have her visit the local library and use microfiche!

On the positive side, less online news and virtually no social media back in 2005 meant that people were able to keep their secrets a little more secret. Lexie’s friend Helen actually makes that comment through the investigation.

The internet makes research so much easier and it’s amazing the information you can find. How much does £1,000,000 weigh? And just as importantly, how many bags will it take to pack that amount? I often wonder why other people might need to know these things!

I was fascinated listening to a television report recently about a plant that I’d never heard of before that grows in New Zealand, and is deadly to humans. I checked it out and sure enough, there it is, and you can even find it in the ranges close to Auckland. It has a bitter taste, but hey, for a murder plot you just need to come up with a spicy recipe.

The internet makes fairly easy work of finding information on travel. For another novel I needed to work out the timing of a route between Geneva, Switzerland and a rural destination in southern England. Easy. Maps and even ferry timetables, because you can’t carry £1,000,000 in bags on a plane.

I’ve written some of this a little tongue in cheek, but I do take research seriously. Every reader of a book or viewer of a film is an expert on something and if you mess up or don’t do the research and get something wrong the magic of the story disappears.

Many thanks again and happy reading to you and your followers, Shauna xx

Who Is Shauna Bickley?

Shauna writes mysteries featuring characters who aren’t afraid to go looking for murderers and generally get themselves in all sorts of danger. In real life, Shauna doesn’t do any of those things.

When she can’t come up with a murderous plot, she also likes to write about ordinary people pushed into extraordinary situations. Underneath all that criminal intrigue is a true romantic who likes to see the magic and mystery in everyday life.

When she isn’t writing (or surfing the internet pretending she’s researching), you can find Shauna reading, running (or more likely walking), coming up with excuses not to attend Zumba, and trying to find new ways to use the excess fruit from the trees in the garden.

Currently she’s working on a sequel to Writing the Stars, but if discovered staring out of the window she’s probably contemplating new ways to kill people for a third Lexie Wyatt novel.

Shauna is always happy to hear from people, but only if they’re friendly and don’t ask hard questions. You can find her on Twitter, Pinterest and via her website or through good old-fashioned email.