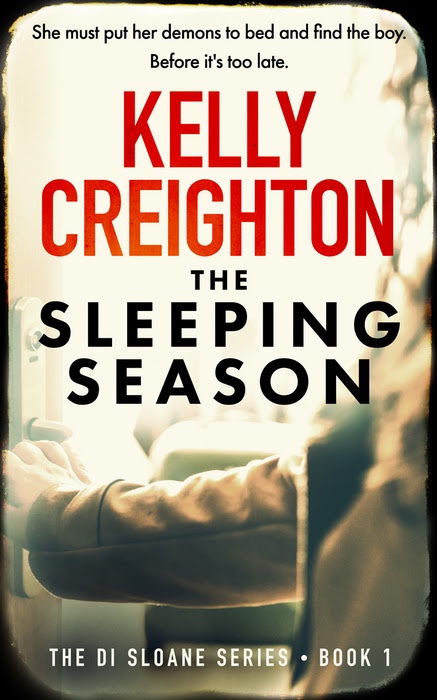 So we’ve reached the end of March and what month it’s been!! What a start to 2020 too! New Years Eve seems such a long time ago!! Anyway, today I’ve got a fab extract from Kelly Creighton’s The Sleeping Season.

Many thanks to Maggie at Friday Press for inviting me on the blog tour.

Someone going missing is not an event in their life but an indicator of a problem.

Detective Inspector Harriet Sloane is plagued by nightmares while someone from her past watches from a distance.

In East Belfast, local four-year-old River vanishes from his room.

Sloane must put her own demons to bed and find the boy. Before it’s too late.

Zara waited for Raymond to be done. Across the room the fingerprint expert, Stuart Thomas, a Welsh man in his late forties with generous eyes and broad shoulders, lined Raymond up in front of the LiveScan machine. He told him to put one hand in, then the other, finger after finger. He watched Raymond as he swayed slightly and put a hand behind him as if, even if Raymond were to fall, he was catchable. I offered Raymond a seat but he refused.

Zara kept a close watch on the process too. I told her it would help us eliminate people. Anything I did or proposed doing she asked if it was necessary, even down to taking a statement from her. Raymond didn’t question a thing; he cordially obliged when I mentioned the scans. He seemed almost excited to stand in front of the machine.

‘We’re all reduced to numbers,’ he said over his shoulder, pressing his index finger against the screen, Stuart holding it in place.

I stepped forward to watch Raymond – his face, his tongue, how it folded on his lower teeth and protruded out of his mouth giving him the profile of a bullfrog. Really, there was nothing remotely handsome you could find in that face. What in the world had Zara seen in him?

Chief Dunne walked through the room holding a cup of coffee, doing that thing where he seems like he is not paying attention. But believe me, nothing escapes that man. Simon was sitting at a desk flicking through the pages of a document, his pink skull shining through his hair; beside him Higgins was bent over, one hand on the desk, the other thrumming his pen on a pile of paper, his face up close to the computer monitor. I noted his ‘hat hair’, a little tuft sticking up.

Dunne stopped to talk quietly to them, standing at such an angle that Zara, Raymond, Stuart and I were just to one side of him. He was in to see what the parents of our young man looked like, no doubt, and get a read on them. It was what he did, not that you’d necessarily notice. Everything about the Chief was alert and not about to switch off anytime soon.

When Raymond’s scans were done he stepped back and sat down. Then it was Zara’s turn. She forgot about the cluster of keys she had set on her lap and they dropped to the floor as she got up. Raymond stooped to get them, but I got in there first, dropped them into his hand.

‘Thanks, Harriet,’ he said.

I noticed the questioning look Stuart gave Raymond for his over-familiarity. It probably seemed weird to Stuart, being male and all. The Chief, drinking coffee, allowed his eyes to take Raymond in, then Zara, who walked to the scanner smoothing her clothes down. Stuart guided her, speaking as pleasantly and distractingly as a Family Liaison Officer speaks to a child. She looked back at him with doe eyes. She looked really pretty, for a second I felt a pang of jealousy. I know! Me? Jealous of her? Here in the Venn diagram of the scan room pity and envy overlapped in me. It was madness, I know that now.

‘That’s some piece of gear there,’ Raymond said.

‘Yes,’ I replied, ‘it’s all different nowadays, with technological advances.’

‘We’ll have our answers wild and fast then.’

Then there was a racket, Higgins saying, ‘How did that get in here?’

Circling the room above us was a parakeet, yellow and green, a red hat of feathers topping its head. Dunne soon left the room, like it wasn’t his problem, and closed the door behind him. Raymond was mesmerised. A smile brought his tongue to the edge of his mouth. I couldn’t see anything but that; I couldn’t see past that expression on his face. Raymond was happy. It would be good to be that happy. He was not taking his situation seriously.

‘Well,’ said Linskey as she entered the room, ‘we all done here?’

‘Close the door behind you,’ Higgins shouted.

She paused, saw the bird and then obliged.

She signed the form dutifully.

Higgins put his hand out, the back of it steady. There the parakeet settled.

‘First time you get the bird,’ said Simon.

‘I wouldn’t say that,’ said Higgins.

We all gathered round, Raymond and Zara included. Stuart was saying, ‘This is someone’s pet. Obviously used to being handled.’

‘Okay,’ I said, trying to get everyone away.

‘I doubt it takes two of you,’ I remarked.

Zara’s face tightened; she was growing impatient. I thanked Stuart. Linskey led the couple to the interview suite, and I followed along the dark corridor behind them. She turned and gave Raymond and Zara that mumsy little smile of hers, her snub nose creasing up, and opened the door to the waiting room.

‘Take a seat, Raymond, and we’ll be right with you,’ she said. ‘We’re just going to speak with Zara first, okay?’

‘That’s fine,’ said Raymond as he hobbled in. ‘Zee,’ he said as an afterthought, ‘you’ll do fine.’

Who Is Kelly Creighton?

Kelly Creighton was born in Belfast and now lives in Co. Down with her family. She facilitates creative writing workshops for community groups and schools, and mentors new writers. Author of The Bones Of It, Bank Holiday Hurricane and Three Primes, she writes crime fiction and literary fiction. Currently Kelly is working on a detective series set in East Belfast. The Sleeping Season is book 1 in the DI Harriet Sloane series. Book 2 in the Sloane series will be released in November 2020.

You can keep up to date with Kelly’s news at https://kellycreighton.com/