Im thrilled to be welcoming the blog tour for Kerena Swan’s Who’s There? to A Knight’s Reads on this chilly Sunday!

Many thanks to Sarah Hardy of Book On The Bright Side Publicity for inviting me on the blog tour and for my e-copy of Who’s There.

“Who’s There? landed in my inbox and completely took my breath away. It was different from anything else I had read in recent years, with brilliant characterization and an inventive plotline. I loved it!” Anita Waller

Arnold Eastwood is thrilled when social services allocate him a flat all of his own. Independence hasn’t come easily to a young man with Downs Syndrome but now he has the chance to live free from his mum’s nagging, find a girlfriend, watch endless movies and make new friends.

Meanwhile a London drug gang is setting up a supply line in Arnold’s town. They’re looking for someone to deliver drugs for them and somewhere to set up a base of operations.

Soon Arnold and his flat are in the drug gang’s sights. Drawn into the dark underworld of crack cocaine and modern slavery, Arnold soon discovers that friends can in fact be deadly enemies.

The question is: can he break free? 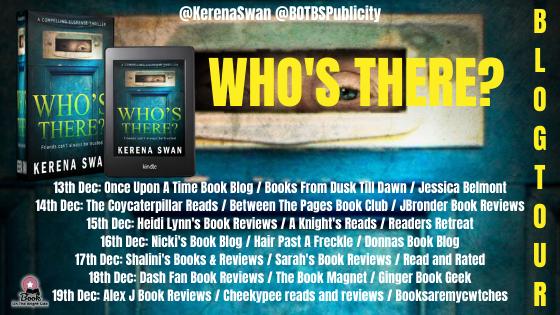 When your children show signs of growing up, it’s hard for a parent. It’s especially hard for Linda as Arnold wants to move out and start to be independent. Even I was nervous for Arnold moving out. There are some nasty people out there who can take advantage of someone like him.

But Arnold is a determined young chap, keen to stand on his own two feet and make friends which he does. As the story goes on, Arnold’s “friends” show their true colours and he loses control of his new independent life.

Swan has created a varied cast of characters from the naive Arnold to the scared Chip and the controlling Poker. This makes for an interesting suspenseful read about an innocent being dragged into the dark and scary world of drugs.

Who Is Kerena Swan?

Kerena Swan trained as a Social Worker and worked for Social Services for over 25 years. For the past 14 years she has owned and managed an ‘outstanding’ rated agency for children with disabilities.  Following serious illnesses she decided to fulfil her long-held ambition of writing a book and getting it published. ‘Dying to See You’, published by Bloodhound Books, was her debut novel.

After many years of writing professionally in the course of her work, Kerena has discovered the exhilaration and deep joy of writing fiction and can be found at all hours in front of her computer. Her second novel ‘Scared to Breathe’ is now available and her third book, ‘Who’s There?’ will be released on December 13th 2019.

Kerena lives with her family in a small village in Bedfordshire, UK and her books are set in the surrounding areas.

Drawing on her extensive knowledge and experience of the problematic world of social work and social studies, Kerena adds a unique angle to the domestic noir and crime genre.