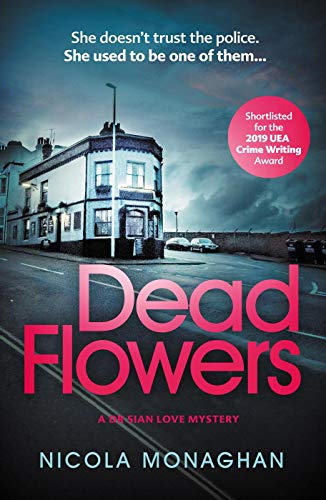 Many thanks to Clare Quinlivan of Verve Books for inviting me on the blog tour and for my e-copy of Dead Flowers.

She doesn’t trust the police. She used to be one of them.

Hardened by ten years on the murder squad, DNA analyst Doctor Sian Love has seen it all. So when she finds human remains in the basement of her new home, she knows the drill.

Except this time it’s different. This time, it’s personal…

A page-turning cold case investigation, Dead Flowers is an intriguing, multi-layered story perfect for fans of Kate Atkinson’s Case Histories and British crime dramas like Line of Duty and Unforgotten.

Once a copper, always a copper! Sian Love may have left the murder squad and carved herself a new career in DNA analysis but her investigative instinct is still going strong!

When I picked up Dead Flowers, I didn’t realise it was set in Nottingham, the city of my birth and early years. I love Nottingham almost as much as I love my home city of Leeds. I spent many Saturdays shopping in this fabulous city so a lot of the street names were familiar to me even if the specific locations weren’t. This meant I could follow Sian and the 1970s cohort around Robin Hood’s city.

I loved the time-jumping every few chapters between present and the 1970s. It gave me plenty of opportunity for me to try and work out who the unfortunate individuals in Sian’s basement are and who killed them and why.

I devoured Dead Flowers in less than a day, glued to my kindle curled up on the sofa. With each chapter more questions were raised in my mind than were answered!! I really enjoyed Ms Monaghan’s writing style, building the tension and intrigue chapter by chapter. She’s definitely an author going on my watchlist! I hope this is the start of a new series to follow!

Who Is Nicola Monaghan?

Nicola Monaghan has lived and worked in London, Paris, Chicago and New York but returned to her home town of Nottingham in 2002 to pursue a masters in Creative Writing. She graduated from Nottingham Trent University in 2004 with a distinction, and went on to write her first novel, The Killing Jar, set on the council estate where she lived as a child. This debut novel was highly critically acclaimed, and won a Betty Trask Award, the Authors’ Club Best First Novel Prize and the Waverton Good Read. She has written several other novels, novellas and a collection of short stories. She also teaches Creative Writing at De Montfort University, and online at YouTube, Udemy and Skillshare.