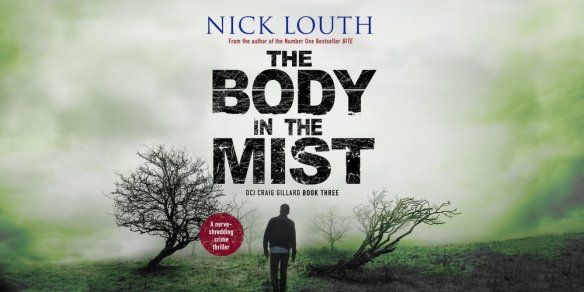 Whoop whoop we’re half way through the week and I’m thrilled to be taking part in the blog tour for Nick Louth’s The Body In The Mist. I’ve got a rather enticing extract to whet your literary appetite!

Many thanks to Ellie Pilcher at Canelo for inviting me on the blog tour!

A brutal murder hints at a terrifying mystery, and this time it’s personal.

A body is found on a quiet lane in Exmoor, victim of a hit and run. He has no ID, no wallet, no phone, and – after being dragged along the road – no recognisable face.

Meanwhile, fresh from his last case, DCI Craig Gillard is unexpectedly called away to Devon on family business.

Gillard is soon embroiled when the car in question is traced to his aunt. As he delves deeper, a dark mystery reveals itself, haunted by family secrets, with repercussions Gillard could never have imagined.

The past has never been deadlier.

From master storyteller Nick Louth comes the third instalment in the DCI Craig Gillard series. Compelling, fast-paced and endlessly enjoyable, The Body in the Mist is a triumph, perfect for fans of Robert Bryndza, Angela Marsons and Faith Martin

Smeared jewels of red tail lights snaked ahead into the darkness and the rhythmic lament of the wipers made only the briefest impression on the rain. A Friday evening, heading out of London to the south-west. Like everybody else on the planet, or so it seemed. They had the radio on because they were not speaking. Craig Gillard’s hands gripped the wheel, arms straight, as if he were racing, but they had only moved a few yards in half an hour. Sam eyed her husband of two years. They had argued, uncharacteristically, for three junctions round the M25. Now 12 miles along the M3, a heavy silence lay between them.

It had begun with a phone call to their home on Wednesday evening. Gillard had just got back from a particularly rough day. A man’s suicide on the railway track at Worplesdon, just outside Guildford. Initial reports were that he may have been pushed. Gillard had taken statements from a number of upset witnesses, and had been there when the news was broken to the man’s wife. His final commute, as it turned out. He had lost his job months ago and had never told her, just continued to make the journey until the day his season ticket ran out. It seemed an appropriate day to throw himself under a train.

Sam had assumed that that was why Gillard had been irritable that Wednesday evening. He had not thanked her for the special meal she had cooked. Gazpacho followed by seafood paella and zabaglione, which was quite a tricky dessert. He hadn’t noticed the new blouse she was wearing, nor remarked upon the fact that she had lit candles at the dinner table. She always made allowances for the stress of his work, the things he had to see, the people he had to deal with. Criminals, obviously. She coaxed him to talk. That usually helped. But the long phone call he received just before dinner, which he had taken out of hearing up in their bedroom, seemed to have made things worse.

‘Who was that, Craig?’ she had asked.

‘Tricia. Auntie Trish,’ he said with a roll of his eyes.

Sam remembered her from their wedding. She was a tiny little fluttering bird of a woman, about 70, with quick bright eyes and an enquiring mind. But she could certainly talk for England. They had a standing invitation to visit her in Barnstaple in Devon, one that Gillard had always seemed determined not to accept. ‘What did she want? Is she all right? You were on there a long time.’

‘Timing my calls now?’ he had snapped. Seeing the look of shock on her face, he immediately apologized, blaming the stress of the day. She had put her arms out to him, but felt that his embrace was perfunctory, the kiss on her ear absent-minded, the pat on her back merely a genuflection. His mind was elsewhere.

He looked away. ‘Usual family stuff.’ His expression telegraphed it was anything but usual, but she had let it lie.

Next day, from work, he had texted her the idea of a long weekend away in Devon. Friday evening to Monday afternoon. Brilliant. That had been her response. She was on a flexi day on the Monday. It would work well. Sam was surprised, because she was normally the one dragging him away from work, making all the arrangements for time away. This time Craig said he would sort everything out. ‘There’s no need to book anywhere,’ he had said. She wondered if he was making amends for his coldness the day before.

Sam had been on an overnight shift at the police incident room on Thursday, so it was only when he got home from work on Friday afternoon that she was able to ask him exactly what they would be doing.

‘Don’t get too excited,’ he had said with a grimace. ‘We’re spending the first night with Trish, and then we’re staying with dreaded Barbara on a farm by the North Devon coast. Near Exmoor.’

Gillard looked at her and raised his eyebrows with unreleased knowledge. ‘We’ve also got to visit my uncle Philip, in a care home. A bit tedious, I’m afraid.’

The good mood endured while they packed. The forecast was vile, a named storm due in on the Saturday, with gusts of a hundred miles an hour on exposed coasts. And Sam soon discovered they were going to be staying on a very exposed coast. There was no point in taking any rock-climbing gear; instead they would settle for some good blustery, coastal walking. Fabulous.

It was only when they had started the journey, and when Sam brought up the subject of Auntie Trish again, that the atmosphere soured once more. Had Craig and Trish been cooking up this long weekend on the phone call together, she wondered. She asked him.

‘No, Sam. Nothing like that. Barbara, Trish’s sister, had her car stolen on Wednesday afternoon, and someone used it in a fatal hit-and-run.’

‘Oh God,’ Sam said. She had heard of mad Auntie Barbara before. ‘How tragic.’

‘Have they found who did it?’

‘Not yet. That’s where the story gets a little muddy,’ Gillard said, turning to her. ‘When they interviewed her, they asked if she had been driving it. She’s denied it, of course – no surprises there. But she drinks like a fish, and from memory drives like a loon, so who knows?’

‘What are they expecting you to do?’

‘Yes, exactly,’ Gillard said, tapping his fingers on the wheel. ‘It’s almost like they want me as some kind of referee, just because I’m police. If she’s worried, she needs a lawyer. I told her. I can’t really help her. I’d rather not be involved.’

‘Oh, Craig. She’s your aunt, she probably just needs a bit of reassurance.’

‘Barbara? You’ve got to be joking.’ Gillard barked a sceptical laugh and shook his head. Nothing was said for a while. ‘Trish told me that Barbara had a drink-driving conviction a few years ago, and only escaped a ban because she runs the farm pretty much single-handedly. So it’s not surprising that the local fuzz might think she made up the story of the car being stolen.’

‘Who was the victim?’

‘That’s the thing. They don’t know. I don’t have any contacts in Devon Police, but the news stories I googled were pretty lurid. Reading between the lines it seems the bloke was dragged along the road for a long way underneath the car.’

‘How horrible. Well it can’t be her, surely?’

Gillard’s eyebrows arched. ‘That only shows that you’ve never met her. All I know is that this is going to be a complete pain in the arse. Trish has high expectations of what I can do, and I’m sure I’m going to disappoint her. Sam, be warned, this weekend may not be all that much fun.’

‘That’s all right,’ Sam said, squeezing his leg. ‘I’m here to support you. Through thick and thin.’

Who Is Nick Louth?

Nick Louth is a best-selling thriller writer, award-winning financial journalist and an investment commentator. A 1979 graduate of the London School of Economics, he went on to become a Reuters foreign correspondent in 1987. It was an experience at a medical conference in Amsterdam in 1992, while working for Reuters, that gave him the inspiration for Bite, which was self-published in 2007 and went on to become the UK No. 1 Kindle best-seller for several weeks in 2014 before being snapped up by Sphere. It has sold a third of a million copies, and been translated into six languages.

Freelance since 1998, he has been a regular contributor to the Financial Times, Investors Chronicle and Money Observer, and has published seven other books. Nick Louth is married and lives in Lincolnshire.