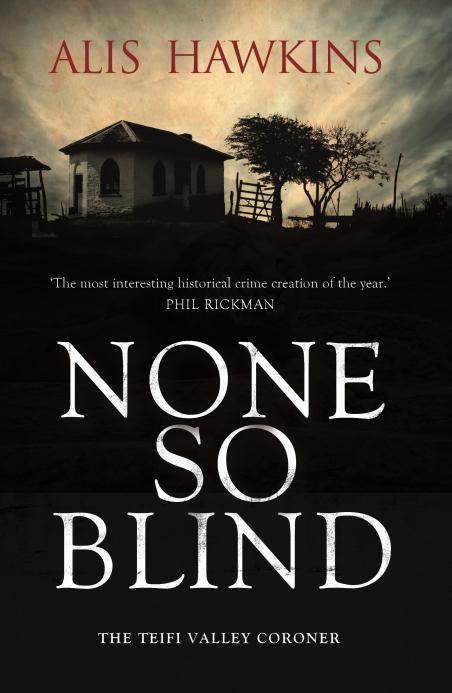 Remember way back when it was the height of the British summer and I shared with you the first look of the cover for None So Blind by Alis Hawkins? No? Well here’s the link if you didn’t catch it – I remember thinking mid November is ages off. But suddenly it’s here and I’m honoured to be kicking off the blog tour! I’d like to wish Alis Hawkins a very happy publication day!! 🎉🎉

Huge thanks to Emily Glenister for inviting me to open the blog tour and to The Dome Press for my advanced copy of None So Blind.

When an old tree root is dug up, the remains of a young woman are found. Harry Probert-Lloyd, a young barrister forced home from London by encroaching blindness, has been dreading this discovery.

He knows exactly whose bones they are.

Working with his clerk, John Davies, Harry is determined to expose the guilty, but the investigation turns up more questions than answers.

The search for the truth will prove costly. Will Harry and John be the ones to pay the highest price?

This is a bit of a different crime read for me. I haven’t read anything this “old” for a good long while. I used to be addicted to the Brother Cadfael books by Ellis Peters as a teenager but my more recent tastes have stuck to the 20th and 21st centuries! But the blurb piqued my interest!

I enjoyed jumping between Harry investigating the discovery and John’s nervous narrative. But then the two are united as Harry takes it on himself to do some more digging.

Who is John?! His identity mystified me as I read. Obviously he is Harry’s clerk and “eyes” but he’s got more to do with this story. He’s got a tale to tell but I was curious how it fitted in with the remains that have been found.

I could sympathise with Harry with his sight. I’ve been short sighted since I was seven and in recent years had issues with my peripheral vision. I totally understood having to put things into the right line to see them. It’s got to be hard for someone so young to be totally losing their sight and I think the author managed to get this across very well!

The case is quite personal for Harry. As the case developed, the more I began to realise how personal it was! The community he grew up in has secrets to hide and it’s hinted at during their testimonies at the coroners court scenes. I enjoyed the different perspective of the coroner’s court even if it is over 150 years ago. It’s not seen much in the crime fiction I’ve read.

It’s a book that slowed my reading. Not sure whether it’s the setting or the general writing. Normally I slow for translated reads. But Alis Hawkins’ writing had the same effect. But I needed to so I could savour the investigation and keep track of the goings on. I’ll definitely be returning to the Teifi Valley. I really enjoyed the intricacies of the start of this series! 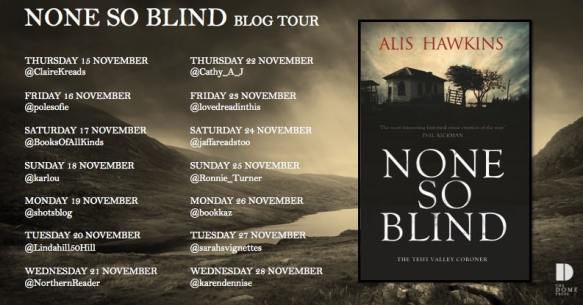 Who Is Alis Hawkins? 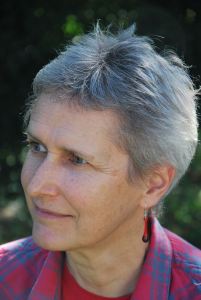 Alis Hawkins grew up on a dairy farm in Cardiganshire. She left to read English at Oxford and has done various things with her life, including bringing up two amazing sons, selling burgers, working with homeless people and helping families to understand their autistic children. And writing, always.

Radio plays (unloved by anybody but her), nonfiction (autism related), plays (commissioned by heritage projects) and of course, novels.

Her current historical crime series featuring blind investigator Harry Probert-Lloyd and his chippy assistant John Davies, is set in her childhood home, the Teifi Valley. As a side effect, instead of making research trips to sunny climes, like some of her writer friends, she just drives up the M4 to see her folks.