Sooooo we’re kicking off September with a bang! Yes The Third Breath blog tour has stopped here at #AKnightsReads and I’m thrilled to be sharing the day with Donna over at Donna’s Book Blog! Malcolm Hollingdrake has written a special guest post which I’m delighted to be sharing with you.

Big thanks to the fabulous Sarah Hardy of Bloodhound Books for inviting me to join the blog tour.

DCI Bennett is away on compassionate leave. After much soul-searching, he has decided to attend his father’s funeral.

DS Owen is left at the helm when the discovery of a body in a car in the multi-storey car park is reported. Initially, the Coroner rules out suspicious circumstances but when a second body is found with similar symptoms, Bennett is back in the fold. He suspects that the coincidences must be of some significance.

Soon Bennett’s team are hunting for a callous and devious killer who has covered his tracks effectively.

Will Bennett’s perseverance and attention to detail eventually crack this perplexing case?

Can you believe it? As I sit here and type this guest post for ‘The Third Breath’, book seven in the Harrogate Crime Series I find it difficult to comprehend that I’ve reached the end of the seven book Bloodhound contract.

When Betsy and Fred asked me to extend the contract from four to seven Bennett books, I had, if I’m being honest, doubts as to whether I had three more books in my head. Strangely enough with book seven being readied for publication, I wonder why I had those initial concerns. The writing process proved to be neither frightening nor traumatic. It was simply a case of being disciplined, sitting down daily and allowing the ideas to travel to the printed page.

People always ask me if the ideas for a new novel come easily. Funnily enough, immediately after writing ‘Game Point’, I closed the laptop and I went to have a glass of wine with Debbie. Within minutes, the idea for ‘Dying Art’ came immediately to mind. I nipped back to the computer and wrote the first seven hundred words before returning. Where the idea had come from, I really don’t know but I’m grateful it did. I also gnaw and nag ideas, I allow them to gestate and tumble in my head, neither making notes nor writing anything down for a few days. It is only when I am comfortable that the idea is viable will I commit fully to paper. Once started, I will then see the concept through to the end.

So what about the plot for book seven? A friend contacted me who had spent all his working life in a specific industry He suggested we meet to chat about his idea for committing the perfect murder. Although I have to admit to being reluctant, I went to see him. A number of hours later, I was totally hooked. That conversation generated a good deal of research, not only into the industry itself but also the medical side to the idea. I was hooked and slowly ‘The Third Breath’ came to life or should I say… death?

I have already started book eight. How could I not? Carrying on from book seven, there are questions that need answers and Cyril Bennett is far from finished. Harrogate is such a special town and I feel it to be the perfect setting for the series; surrounded by the most stunning countryside dotted with breath-taking scenery and villages and communities that allow me the flexibility to develop stories and characters.

Bennett has also made many new friends in Harrogate and I have heard a number of visitors to the town take time out to look to find places mentioned in the books… I just love to hear that. I also find that people who have lived in the town for many years are unfamiliar with areas included in the books. Many are unaware that The Brunswick Tunnel runs under a part of the town.

I am also busy with other projects too. Close to my heart is a short story, ‘The Penultimate Man’. It is set on the final days of World War One and as this year is the centenary of the ending of the war to end all wars, I thought it a fitting tribute to release it as a charity publication. At the moment, I am planning a commemoration of this important event to take place at the Harrogate Library on the afternoon of the 10th November 2018. Along with Nicholas Camm, the narrator of the Bennett audiobooks, two Bloodhound authors and Sophie Lawson, a singer from Scotland will take part. It will comprise songs, readings from the war poets, two commissioned short stories and a full reading of ‘The Penultimate Man’. There will be a hundred tickets sold, each dedicated to one of the fallen and all money raised will go to the Harrogate Branch of The Royal British Legion. More will follow on social media regarding this event.

So as well as having another Bennett book on the go I have been commissioned to write a new three book series but as I write this, that is all I can say at this stage.

Altogether I have written ten books. Seven in the Bennett Series, two self-published, ‘Engulfed’, ‘Shadows from the Past’ and the short story ‘The Penultimate Man’ available on Amazon and one other that may never see the light of day. However, getting the books in front of readers is by far harder than the writing process and I am eternally grateful to the marvellous bloggers who give their time to support the many authors. I am grateful too to the readers who have bought and enjoyed my work. Thank you very much.

Thank you Malcolm for a wonderful guest post. And if Malcolm’s writing has caught your attention, why not catch up with the rest of the blog tour! 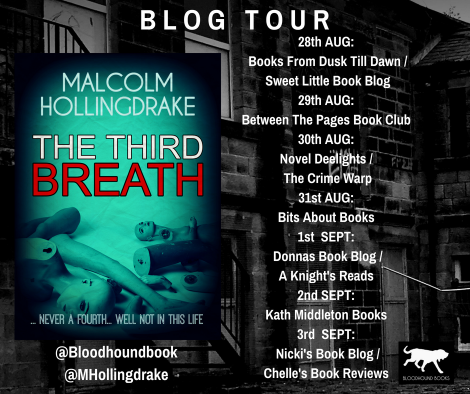 Who Is Malcolm Hollingdrake?

You could say that the writing was clearly on the wall for anyone born in a library, that they might aspire to be an author but to get to that point Malcolm Hollingdrake has travelled a circuitous route.

Malcolm worked in education for many years, even teaching for a period in Cairo before he started writing, a challenge he had longed to tackle for more years than he cares to remember.

Malcolm has written a number of successful short stories and has ten books now available. Completing ‘The Third Breath’ fulfils the seven book publishing contract with Bloodhound Books but there are exciting plans for the future, not only with DCI Bennett and his team but also with another series. More information will follow soon.

Born in Bradford and spending three years in Ripon, Malcolm has never lost his love for his home county, a passion that is reflected in the settings for all his novels.

This year, Malcolm self-published a beautiful and poignant short story titled ‘The Penultimate Man’ to commemorate the centenary of the conclusion of WW1. It has also been released as an audiobook.
Malcolm has enjoyed many hobbies including collecting works by Northern artists; the art auctions offer a degree of excitement when both buying and certainly when selling. It’s a hobby he has bestowed on DCI Cyril Bennett, the main character in his latest novel, ‘The Third Breath’.