Have you ever had that feeling of being watched but when you turn around no one’s there?

It was raining, and I was working a murder scene around midnight when that prickle ran up my spine. If I’d listened to that feeling, if I’d thought back to my past, maybe I could have prevented the terror that was to come.

Back at the office, I found a death threat on my desk.

I had no idea who sent it or why they wanted to kill me.

But I was about to find out.

I’m Eddie Collins, a CSI and this is my story.

Welcome to Leeds and Eddie’s dark world. This is a short sharp introduction to Mr Collins and his work. Eddie has a target on his back and doesn’t know why…

“It’s hard to dance with the devil on your back”

You hit the ground running with a murder in one of the less desirable areas of Leeds in the rain. I totally feel the frustration of a CSI in the rain! I’ve watched enough cop shows and read many police procedurals to feel the pain of evidence just being washed away by Mother Nature!

It’s like Eddie is talking to me as he works through the night. Eddie is your a-typical Yorkshire man, blunt and to the point. He doesn’t hold back his opinions particularly of those in CID.

With all action taking place over a few hours, The Note is just what I expect from a short story, a fast paced, waffle free tale. If you fancy getting acquainted with Eddie, this is an ideal way to dip your toes into his world!

Don’t forget to catch what these fabulous bloggers have to say about The Note. 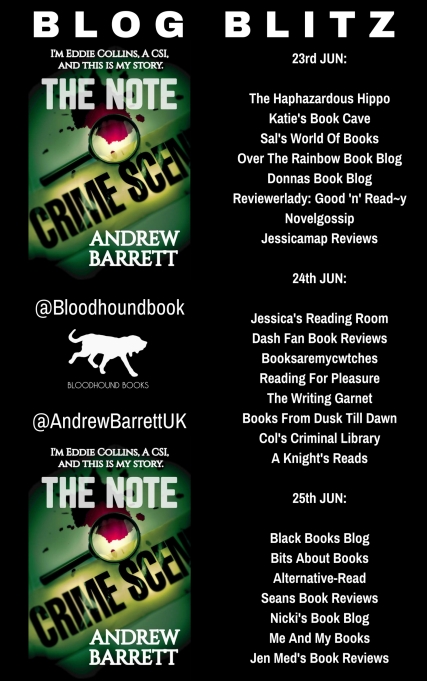 Who Is Andrew Barrett?

Andrew Barrett has enjoyed variety in his professional life, from engine-builder to farmer, from Oilfield Service Technician in Kuwait, to his current role of Senior CSI in Yorkshire.

He’s been a CSI since 1996, and has worked on all scene types from terrorism to murder, suicide to rape, drugs manufacture to bomb scenes. One way or another, Andrew’s life revolves around crime.

Today, Andrew is still producing high-quality, authentic crime thrillers with a forensic flavour that attract attention from readers worldwide. He’s also attracted attention from the Yorkshire media, having been featured in the Yorkshire Post, and twice interviewed on BBC Radio Leeds.

He’s best known for his lead character, CSI Eddie Collins, and the acerbic way in which he roots out criminals and administers justice. Eddie’s series is four books and two short stories in length, and there’s still more to come.

Andrew is a proud Yorkshireman and sets all of his novels there, using his home city of Leeds as another major, and complementary, character in each of the stories.