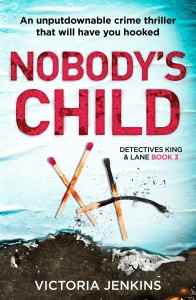 Whoop!!! Today I’m joining the awesome Vicki over at I Love Reading on the blog tour for Victoria Jenkins’ third King and Lane novel Nobody’s Child.

Big thanks to the fantabulous Noelle Holten of Bookouture for having me on the blog tour and to Bookouture and Netgalley for my copy of Nobody’s Child.

An absolutely gripping mystery thriller with a jaw-dropping twist. This book will hook you from page one and keep you reading ‘just one more chapter’ late into the night.

On a damp October day, a body is found in an abandoned hospital, too burnt to be identified, but Detective Alex King knows that every victim is someone’s daughter or son.

Pushing aside her own troubles, Alex puts everything into finding the killer, but when someone else is found dead, she begins to suspect that the body in the hospital was just the first of many.

Just as Alex uncovers a heartbreaking link between the victims, she finds her own safety under threat. Is this a figure from her past hell-bent on revenge, or could the murderer be even nearer than she thinks?

Alex is running out of time. Can she catch the killer before they take another life, or will they get to her first?

A completely unputdownable detective thriller that will keep you up all night. Readers of Robert Bryndza, Karin Slaughter and Angela Marsons will love this.

What a chilling prologue! Here’s me thinking I’m in for a police procedural featuring a serial killer, when I’m greeted with a terrifying opening! Totally gave me the goosebumps!

To start with, the story jumped around a bit setting the scene and introducing the characters but as I ticked off the chapters, the story settled down.

My mind was all over the shot trying to fathom out what was going on. And it’s no wonder with the amount of secrets Ms Jenkins has packed into this story. The more I read, I got hooked into the team and I was holding my breath as the story climaxed.

I’ve not read the previous King and Lane stories so reading this from a standalone perspective, it totally works as one. The author has put in enough that I didn’t feel I was missing out by joining the series three books in. But I have to say, I will be going back to start and reading The Girls In The Water and The First One To Die.

Well I hope I’ve whet your appetite to read this crime thriller for yourself. But if you need more convincing, have a scooch round the blogs listed below and see what they all thought! 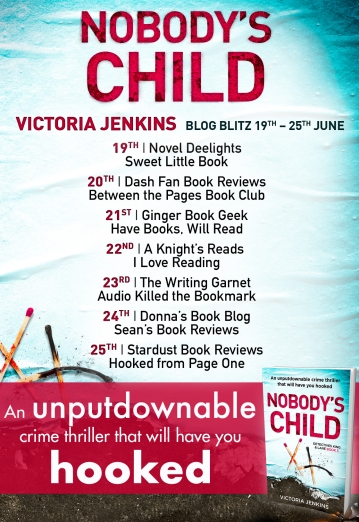 Who Is Victoria Jenkins? 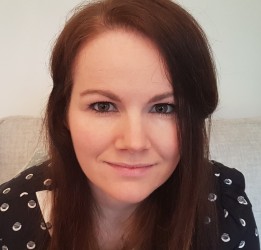 Victoria Jenkins lives with her husband and daughter in South Wales, where her series of crime novels featuring Detectives King and Lane is based. Her debut novel The Girls in the Water is an Amazon UK top 30 bestseller, and top 5 bestseller in the Amazon US chart.

The third book in the King and Lane series, Nobody’s Child, is out now!

You can catch up with Victoria on:
Twitter @vicwritescrime