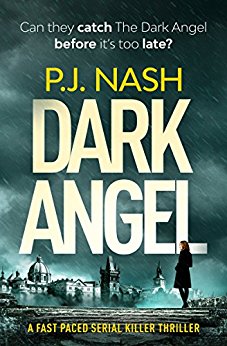 Woo hoo 🎉🎉 Happy Publication Day to P.J. Nash 🎉🎉  Dark Angel is out today and I am thrilled to be part of the opening day of the #blogblitz. I’ve got a bit of an insight for you all as P.J. Nash is today talking about where his books The Hunt for The Dingo and Dark Angel came from!

Massive thanks to the amazing Sarah Hardy of Bloodhound Books for inviting me to join in the publication day celebrations!

When a commuter discovers a mutilated corpse on the Prague Metro, Captain Jiri Hofschnadir of the Criminal Police is called in to investigate.

Meanwhile, in Hong Kong, newly-weds ex British cop Lawrence James and forensic psychologist, Jessie Sandersen are on honeymoon after their frantic efforts to capture the Australian serial killer known as The Dingo.

But wherever James and Sandersen go, trouble is never far behind.

As the body count rises in Prague, Sandersen is called in to help track down the serial killer dubbed The Dark Angel.

In a game of cat and mouse, James and Sandersen will be pushed to their very limits.

But can they catch The Dark Angel before it’s too late?

It all started at Travis Perkins – I was working two lucrative days a week as a proof-reader checking lots of fascinating tool catalogues (this isn’t ironic – I’m a big fan of hammers, chisels and stuff). A vague idea floated around my head. Australia – the Outback, the wide-open road. Anything but an industrial estate in Northamptonshire. I’ve always been interested in big countries like Australia and America. But let’s face it, America belongs to Jack Reacher. And when it comes to a fight, we’re not evenly matched. But the outsider in a strange place theme carried some weight for me. So, it had to be a British cop in Australia. I had been lucky enough to visit Australia in the late 90s but never got to go to the big red Outback bit. My interests in that bit of Australia, especially the Northern Territory had been piqued by the murder of Peter Falconio, a British tourist who was killed on a roadside in close proximity to his girlfriend Joanne Lees. The pair had been travelling in a campervan around Australia. There’s loads more detail which you can investigate at your googling leisure. Suffice to say it’s a tragic but intriguing case, which acted as a catalyst for ‘The Hunt for the Dingo’. But ideas for books aren’t usually a ‘Light Bulb’ moment. They’re not a single, clean big idea, but usually a distillation of many thoughts and ideas.  The cliché of having a notebook and pencil by the bed is true in my case. Inspiration hits at any time. This means I usually have a mish mash of texts, emails and scribblings regarding possible plots, characters etc. I text and email myself the ideas. Then once in a while they all go into a hardback notebook, that’s a sort of triage process for my ramblings.

Living in an interesting place makes inspiration for a book a bit easier. I had the privilege of living in Prague in the Czech Republic for three years. Now, I can’t take the credit for being the first to be inspired to write a book whilst living there. Kafka and Kundera kind of cornered that. Paradoxically it’s coming up with something that hasn’t happened for real that’s the issue.  So back to the old cliché of ‘write what you know’. Unlike most people’s perceptions of cobbled streets and shutters, many Praguers live in ‘panelaks’ basically tower blocks made of concrete panels. While in the UK, high rise living is redolent of urine-soaked lifts, sink estates and urban deprivation, the high rises of Prague, or at least the ones I lived in were clean, well maintained and pleasant places to live. The residents are also a mixture of classes and ages from elderly couples to middle class professionals and young families. This whilst not wishing to go down the avenue of snobbery is the ‘real’ Prague. Within a few months of moving there, the crowded tourist traps of Old Town Square and Charles Bridge become anathema. That said when I occasionally found myself at both these places on early winter mornings minus the crowds and tat-sellers, they are both lovely places. So to the inspiration for ‘Dark Angel’. There was no ‘Eureka’ moment. Just a few nudged pebbles that gained some literary moss. The first were the pimps – men who appear on Wenceslas Square in the early afternoon touting for business. The second was the stag parties. For any British expat, these are a constant source of embarrassment. Contemporary Czechs don’t bear much of a grudge about Britain and France selling Czechoslovakia down the river and handing it over to the Nazis in 1938 aka ‘The Munich Agreement’. But they do express a bit of concern over groups of British men acting like marauding Vikings, shouting, bawling and generally bringing bouts of Anti-Social Behaviour to the streets of Prague. Their behaviour is really inexplicable to Czechs. As it’s not like the Czechs are tee totallers. The country produces some of the best beer in the world and it’s relatively cheap to buy. So it’s no surprise they’re actually some of the biggest drinkers in the world. It just seems they don’t become total ass hats when they imbibe a lot of beer. So the sex industry in Prague and beer-soaked Brits were the catalysts for ‘Dark Angel’…

Thanks P.J. for an interesting insight to your inspiration for your books.  I have to say I went to Prague many years ago and it is a beautiful city once you get past the tourists (of which I was one) – it’s somewhere I’d love to go back to. Readers, don’t forget to catch the other posts on this three day blog blitz!

P.J. Nash was born in Nuneaton, Warwickshire, the birthplace of George Eliot and Shakespeare, respectively. Not surprisingly he decided he’d like to be a writer too.

After studying history and working in PR for a few years, he was running a second hand bookshop, when wanderlust and destiny in the form of his future wife took him to Prague.

During his time behind the counter in the shop and travelling on trams between English lessons he wrote his first crime novel, The Hunt for the Dingo featuring maverick British expat cop , Lawrence James and his hunt for a serial killer in Australia. On his return to the UK, he drew on his Bohemian adventures to write his second crime novel featuring Lawrence James and his co-investigator, Dr Jessie Sandersen.  He currently lives on a narrowboat with his wife Clare and grumpy cat, Lulu.

In his past life P.J. Nash was a Special Constable for the Warkwickshire police.

Nash is also a member of the CWA and International Thriller Writers.