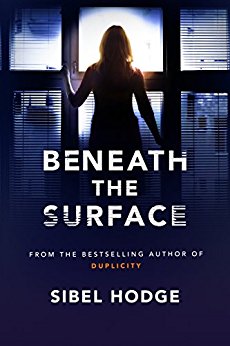 So in between the new releases and blog tour reads, I’ve been trying(!) to read some of the old review requests I accepted during my tenure at #Crimebookjunkie.  I’ve read a couple of Sibel Hodge’s novels before which I really enjoyed so I was delighted to discover I had another sat in the TBR pile to read!

A massive thanks to Sibel Hodge and Crimebookjunkie Book Blog for my copy of Beneath The Surface.

Dean Hudson didn’t look evil…so what could drive an ordinary boy to kill?

When the teenage son of Holly Gold’s school friend brutally murders his parents before killing himself, her sleepy home town is rocked by the sudden tragedy.

Appalled, Holly investigates. What could have caused the happy-go-lucky boy she remembers to commit such a heinous crime? When another teen commits suicide, she uncovers a horrifying link between the recent deaths and a dark conspiracy to hide the truth.

But someone doesn’t want Holly asking questions and, as she hunts for evidence to prove her theory, she’s dragged into a nightmare that threatens her life and her sanity. Then tragedy strikes again—and this time it’s closer to home…

Beneath the Surface is a gripping psychological suspense-thriller from the bestselling author of Duplicity, Look Behind You and Where the Memories Lie.

“….what would happen if everything we hid under the surface showed on the outside.”

Alcohol is Holly’s crutch. She’s grieving when we met her and that’s compounded by the loss of her childhood best friend on such a brutal manner.  Throw in her dysfunctional family and the stresses that can bring along and you’ve got a one messed up woman. This makes her a rather unreliable narrator and one who her fellow characters are concerned about. There were times I questioned whether what Holly was telling me actually had happened or whether it was simply a dream created by the mix of grief, alcohol and stress.

I loved the interspersed single page chapters consisting just of a brief conversation. I was intrigued who the parties involved were. With each conversation, their intentions got darker and more threatening.

The writing is rather compelling, I just kept clicking through the pages to find out what was going to happen next. I feared for Holly’s sanity and life the more she dug into what was happening.

When I read Sibel Hodge’s earlier novel Untouchable, it stayed with me for a while after I’d finished it. Beneath The Surface is an equally thought-provoking tale. I won’t go into why but the matters discussed felt scarily real – it makes you wonder how much of what goes on is covered up and kept from the public eye.  Reading Beneath The Surface has reminded me I need to catch up on the rest of the author’s books!

“Because what lies beneath the surface can be deadly.”

Who is Sibel Hodge?

Sibel Hodge is the author of UK and Australian #1 bestseller Look Behind You. Her books are international bestsellers in the UK, USA, Australia, France and Germany. She writes in an eclectic mix of genres, and is a passionate human- and animal-rights advocate.

Her work has been nominated and shortlisted for numerous prizes, including the Harry Bowling Prize, the Yeovil Literary Prize, the Chapter One Promotions Novel Competition, The Romance Reviews’ prize for Best Novel with Romantic Elements and Indie Book Bargains’ Best Indie Book of 2012 in two categories. She was the winner of Best Children’s Book in the 2013 eFestival of Words, nominated for the 2015 BigAl’s Books and Pals Young Adult Readers’ Choice Award, winner of the Crime, Thrillers & Mystery Book from a Series Award in the SpaSpa Book Awards 2013, winner of the Readers’ Favorite Young Adult—Coming of Age Honorable Award in 2015, and a New Adult finalist in the Oklahoma Romance Writers of America’s International Digital Awards 2015. Her novella Trafficked: The Diary of a Sex Slave has been listed as one of the top forty books about human rights by Accredited Online Colleges.

For Sibel’s latest book releases, giveaways and gossip, sign up to her newsletter at www.sibelhodge.com/contact-followme.

9 thoughts on “Beneath The Surface by Sibel Hodge @sibelhodge #review”