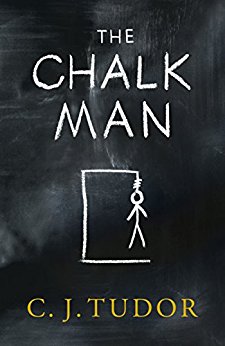 Well looky what we have here….. There has been a lot of praise for this striking debut (including THE Stephen King)! So who was I to refuse when #mamapossum Noelle off of #crimebookjunkie fame offered me her spare copy of The Chalk Man!

It began back in 1986, at the fair, on the day of the accident. That was when twelve-year-old Eddie met Mr Halloran – the Chalk Man.

He gave Eddie the idea for the drawings: a way to leave secret messages for his friends and it was fun, until the chalk men led them to a body.

Thirty years later, Ed believes the past is far behind him, until an envelope slips through the letterbox. It contains a stick of chalk, and a drawing of a figure.

Is history going to repeat itself?

Was it ever really over?

Will this game only end in the same way?

What did I think?

“Every kid wants to find a dead body”

Where do I start with The Chalk Man? Ok yes, where better than the cover? The front cover is so simple but totally grabs your attention with the dusty chalkboard look that I remember from my school days with the simple hangman and chalk written title. But then there is the spine littered with chalk men; now that is a book you can find at a glance on a jam-packed bookshelf!

“We wanted to find something really bad that day”

The story kicks off with such an eerie beginning.  I was chilled from the start and the sinister feel to the tale continued right to the end!

I loved the way the story jumped from the present with Ed and his modern day issues back to his adolescence when everything he knew started to change.  The author dropped in little titbits to explain why Ed’s relationships in the present have changed since the tight comradery of the past.  She totally kept me guessing as to what happened in the past and now in the present.

This is a fantastic debut! Its a cross between a psychological thriller and murder mystery that totally kept me guessing right up to the last page.  It’s a book that just kept giving and the surprises just kept leaping of the page at me!  CJ Tudor is definitely a new voice to watch out for if The Chalk Man is anything to go by!  I for one can not wait to see what the author gives us next!

C. J. Tudor was born in Salisbury and grew up in Nottingham, where she still lives with her partner and young daughter. Her love of writing, especially the dark and macabre, started young. When her peers were reading Judy Blume, she was devouring Stephen King and James Herbert.

Over the years she has had a variety of jobs, including trainee reporter, waitress, radio scriptwriter, shop assistant, voiceover artist, television presenter, copywriter and now author. The Chalk Man is her first novel.